The monthly Pune-based newspaper, which is being published for the last four years, used to be entirely handwritten, before being printed, due to the lack of a digital font 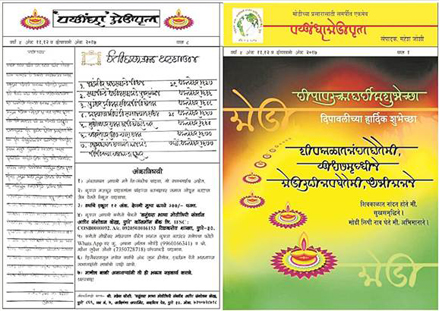 Soon, Vasundhara Vrutta, the only newspaper published in Modi script — an ancient script in which Marathi was once written before Devanagari took over - will undergo a major makeover.The monthly Pune-based newspaper, which is being published for the last four years, used to be entirely handwritten, before being printed, due to the lack of a digital font. Now, the Centre for Development of Advanced Computing (C-DAC), Pune, has developed a digital font for this script.

For the first time, the annual Diwali edition of the newspaper has made use of the newly-developed digital font in its text and designing.

“Though the font is fully developed and ready, we made use of it partially while designing the cover page of the special Diwali magazine. For all these years, the newspaper and magazine used to be handwritten, using Modi script,” said Mahesh Joshi, a Modi script expert and publisher of Vasundhara Vrutta.

Modi is an ancient script that was commonly used to write government documents, manuscripts and old scriptures in Marathi. With the passage of time, as the Devanagari script gained popularity as well as found wider acceptance, Modi script started getting replaced in written documents.

Nearly two years ago, the Maharashtra government had assigned the task of developing Modi script to C-DAC, which is trying to not only revive the script but also use it in deciphering thousands of government documents dating back to pre-Peshwa era.

In fact, Thanjavur in Tamil Nadu has the largest number of such documents, many of them believed to have been written by Maharashtrian scholars working in the royal courts. The state government has tied up with Tamil University, Thanjavur, for this massive exercise of digitisation.

Joshi has been involved in developing and promoting this script since 1992, and now assists C-DAC’s language team in this area.

Mahesh Kulkarni, associate director and head of the Graphics and Intelligence-based Script Technology, said attempts were also being made to make this script, in its digital form, available for government websites with unicode compatibility. “… we have collected a large number of documents written in this script… we are awaiting the formal launch of this font by Chief Minister Devendra Fadnavis,” he said.

All government departments are also being asked to include this script, along with Devanagari, for the Marathi language option on their websites. “Every department has been provided with access details and the content of these websites, since the last four months, is also available in Modi script,” said Kulkarni.