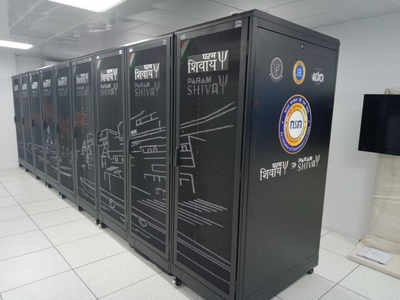 Prime Minister Narendra Modi on Tuesday inaugurated 'Param Shivay' Supercomputer of 833 teraflop capacity built at the cost of Rs 32.5 crore under the National Super Computing Mission at IIT-BHU. A postal stamp was also released by the PM on the Centenary Year of the Institute.

The IIT-BHU director Professor Pramod Kumar Jain said, "The National Supercomputer Mission (NSM) is an important initiative from the Government of India. This initiative supports the vision of the government's 'Digital India' and 'Make in India' and it will also play an important role in keeping India in the forefront of the world's supercomputing map. The research that takes months would be completed in hours or minutes with the help of this supercomputer."

Under this project, the Center for Development of Advanced Computing (C-DAC) has developed the first supercomputer 'Param Shivay' of 833 teraflop capacities under the chain of NSM.

"This supercomputing will benefit the faculty members, scientists and research students of IIT -BHU and the university. Apart from this, scientists, teachers and research students, government research laboratories in adjacent engineering colleges of Eastern UP, the projects will be given 40 per cent computer power and the students of Navodaya Vidyalaya will be familiarized with basic supercomputing. The problems of common man related to relevant social issues such as irrigation schemes, traffic management, health will also be taken care of," the prime minister said.

About the uses of ‘Param Shivay’, he said that indigenous supercomputer software will be developed in various scientific areas, under the supercomputer program. Simultaneously, simulation and modelling will be applied in many areas like climate assessment, weather forecasting, space engineering, seismic analysis, finance, disaster simulation and management, search astrophysics, macro-data analytics, information collection.